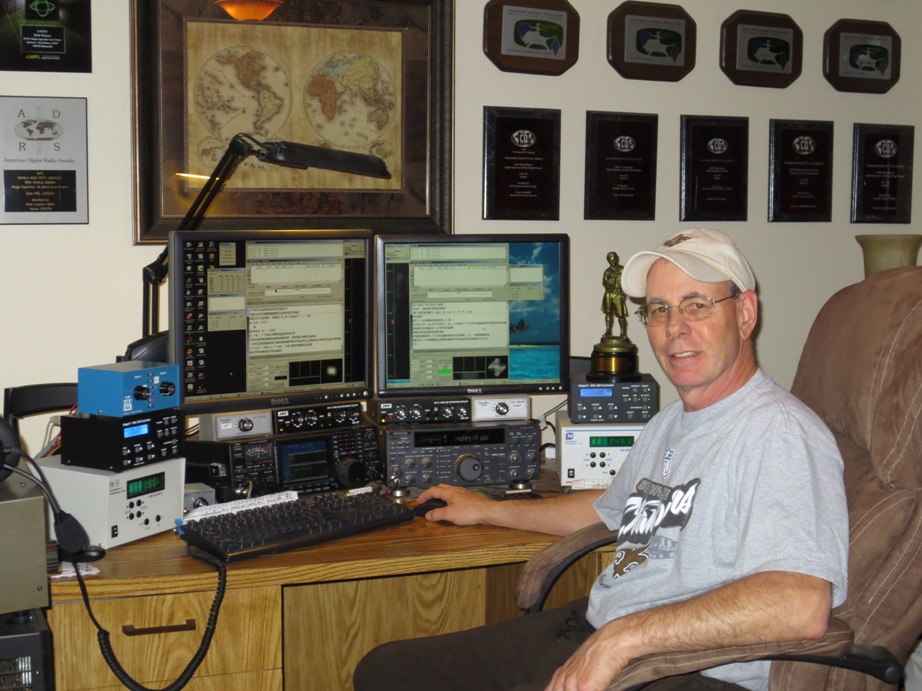 I was first licensed as a ham radio operator in January 1972 at the age of 14 as WN9IVC.  Two years later I upgraded to General Class and became WB9IVC.  In 1979, I moved to southeast Louisiana and in 1987 I upgraded to Extra Class and received my present call AA5AU.  My main passions in ham radio are RTTY mode contesting and DX’ing.  I also enjoy CW contesting and DX’ing.   I am presently on the #1 DXCC Honor Roll Mixed.  I need only one more country on CW (P5 North Korea) and one on RTTY (BS7 Scarborough Reef) to have them all on those modes.  In 2013, I made the PHONE Honor Roll. In January 2010, I received the YASME Award for Excellence for my work in RTTY.  At the 2010 Dayton Hamvention, I was inducted into the CQ Contest Hall of Fame.  My RTTY Page has taken over a quarter million hits and my tutorial Getting Started on RTTY has helped hundreds of people enjoy RTTY.  I also maintain a website dedicated to RTTY mode contesting at www.rttycontesting.com.  I was the RTTY Contesting columnist for the National Contest Journal (NCJ) for seven years before retiring at the end of 2012.  It is my hope that I can help others enjoy RTTY as much as I do.

My current station is set up for SO2R (Single Operator 2 Radio) RTTY contesting.  Radio A consists of an Icom IC-756 PRO III transceiver with an Ameritron AL-80B amplifier that is capable of running 500 watts output on RTTY although in my most RTTY contests I run low power (100 watts).  I use a Dell desktop PC running Windows 8.1 and WriteLog for Windows software.  I use a homebrew cable for receive audio through a Radio Shack audio isolation transformer to the input of the soundcard internal to the PC.  For FSK, PTT and CW keying I use a homebrew transistor interface on each radio.  Station B consists of a Kenwood TS-870 transceiver with an Ameritron AL-80B amplifier.  The computer on this radio is a Dell 4800 desktop PC running Windows XP Pro running Windows XP Media Edition.  I use a Dell 22″ monitor on one computer and an older Dell 20″ LCD monitor one the other computer.  I use an Array Solutions SixPak antenna switch to switch my antennas.  For audio switching I use a Dunestar 2-radio headphone switch.  I also use two Dunestar 600 all-band filters.  For audio filtering I use a JPS NIR-12 dual-DSP audio filter on each radio.

A new 3 element SteppIR was installed in October 2010 but was damaged in Hurricane Isaac in August 2012.  I relocated my smaller Rohn 25 tower from the back porch to the rear of the back yard in November 2010.  I was able to take parts from the damaged antenna and fabricate a 2-element SteppIR which I installed on the smaller tower in October 2012. In December 2012, I installed a new 3 element SteppIR on my main tower which has been lowered to 45′ in an attempt to save antennas from future storm damage.  Check my Antenna page for details on my antenna installations. 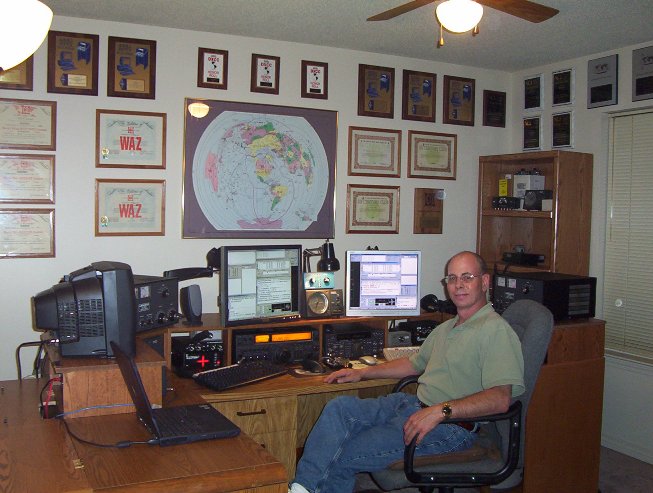 My Radio Shack before Hurricane Katrina