On Thursday, November 6th at 9:00 a.m., Joe Pecot, Dick Pecot and I met up at Gary’s for our annual trip into the marsh to open duck season in southeast Louisiana. Duck season would open on Saturday the 8th. We would spend Thursday & Friday fishing for redfish. With visions of huge redfish and plenty of ducks flying, we loaded up the flatboat and mudboat and headed to the launch in Venice. I pulled the mudboat while Joe towed the flatboat. We all wondered if the monster redfish would be waiting for us.

The trip to the launch and to the campsite was uneventful. We quickly set up camp and decided to go fishing. We immediately set out for the large sand flat in the Gulf of Mexico. The wind was calm and so was the water. We caught several large redfish that afternoon. Normally when one of us hooks a big red, the others reel in their line so the angler with the monster at end of his line has all the room he needs to fight the fish. On Friday Joe hooked into a very big fish. Just as he did, Dick also got a strike on his line. In tandem, they fought big fish. I netted both of them and they got them in the boat at the same time.

Joe’s fish was well over 30 lb. and Dick’s was well over 20, but the scale was broken and we couldn’t weigh them.  We released all the big ones, keeping several “small” ones under 15 lb. After catching and releasing several large fish, including some huge black drum, we went back to the camp and relaxed with a few toddies and Joe’s famous home-made beef stew. We went to bed early dreaming of  what tomorrow might bring.

“Ten Yards Behind the Boat”

Friday we woke up at around sunrise. When we emerged from the tent, we noticed the wind had shifted and there a gentle north breeze. This was great news. We were anticipating a cold front either late Friday or Saturday morning. Since we are set up to hunt in our blinds with a north wind, we were excited. The beginning of this front was starting to arrive. We decided to go ahead and get our fishing done early and off we went.

We went back out into the Gulf and got one or two, but they weren’t biting as well as they did on Thursday. So we fished some canals on the inside picking up one or two good eating-size fish and even a couple of yummy flounder. We ended up at a place we call “four corners” where two bayous meet and empty into the lake. I caught a nice keeper redfish on one corner and we went to the edge of the lake just as the tide started to rise and found ourselves catching little “rat” reds about 12″ long. Since redfish have to be at least 16″ to keep, we threw all the rat reds back but we stayed there a while and had fun catching one after the other.

Eventually we went back to the camp and relaxed with a few toddies. Dick wanted to fish more after lunch but Joe wanted to take a nap. I told Dick I’d go with him so off in the boat we went. We headed straight to the sand flat. Dick had a very good idea where the reef was located, so when we got near the reef he shut off the motor and let us drift with the north wind. By now the wind was a little more stiff and the water was not as calm as that morning or the day before. I cast my line about 20 yards off the back of the boat. When my cork got 10 yards behind the boat, down it went and at first I didn’t know if I had a redfish or hard head catfish. It took a couple of minutes for the fish to realize it was hooked, then off it went, screeching a hundred feet of line off my reel. And I knew I had hooked into a monster red. Since I hadn’t caught one of those 30 pounders yet and had my line broken three times already, I handled this fish with finesse and care. Taking my time, I finally got him close to the boat. When he saw the boat, off he went again. This happened several times. Eventually, after a 15 minute fight, Dick netted the fish. It was the largest fish I’d ever caught. 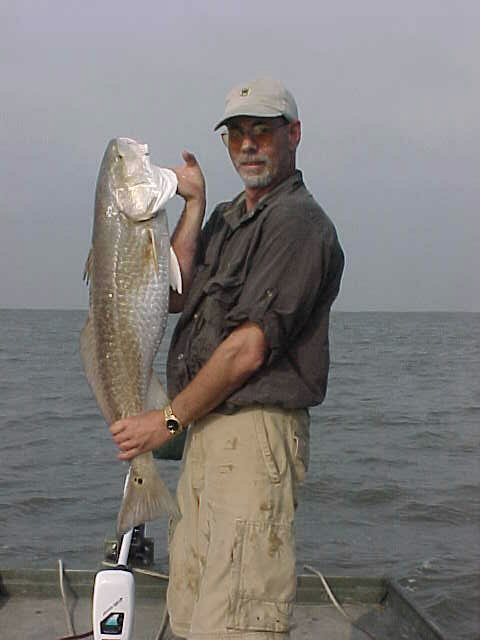 Saturday morning we woke up around 4:30 a.m. Dick fixed coffee and we were all happy to see it was starting to get cloudy and we had a pretty good north breeze blowing. We headed out to blinds and we were in the blinds and ready to go by 5:30. Ten minutes later the first bit of light started coming out from the east. I heard Joe and Dick open the season with a barrage of gun fire a little while later. Five minutes after that I had a teal land in my decoys. I couldn’t see it so I shot in the general direction hoping I’d get him with the 2nd shot after he jumped. He jumped up on the far side of the decoys and flew away from me. I let off my other two shots but missed. I was disappointed to start the season that way.

As I listened to Joe and Dick fire shot after shot, I could only sit and wait for action to come my way. Not much did. A couple of loner ducks came near and I did shoot at a couple but everything was passing shots and none wanted to decoy. Finally just after 7 a.m., a loner teal came in from the right over the canal. I saw him in time to get my barrel on him and down him with one shot over the pond. The tide was low and falling and there wasn’t much water in the pond so I decided to go retrieve the duck before all the water was gone. I got back in the blind when Joe and Dick came to pick me up. They had shot well – a couple of pintail, some grays and teal.

Joe brought me to main blind so I could get a chance at more ducks while him and Dick went back to the camp for breakfast. I shot a teal within the first 15 minutes. A little while later, I spotted two mottled ducks come straight in from in front of me. I had my barrel up and was watching them come in when I determined that they would both be crossing in front of the barrel at the same time just before they landed. So I waited and with one shot just before they lit, I knocked them both down. One was dead and the other started to swim off crippled. I let off two more shots but he was on the far end of the pond. With no piroque to chase him I could only reload and keep firing, hoping to stop him. I never did. He swam off. When Joe came to pick me up, he brought along his dog Annie. We had Annie work the marsh, but she couldn’t find the duck. We went back to the camp.

Joe and Dick wanted to go fishing. I really didn’t want to go, so I stayed behind and cleaned the ducks. They were gone a long time and I’m glad because it took me a while to pluck six of the ducks while I breasted the others. They only caught a few more fish, but some were small enough for the ice chest.

When they returned, Joe cooked hamburgers. We ate, listened to football, drank a few toddies and relaxed before the evening hunt. At 3:30 that afternoon we returned to the blinds. By this time, the overcast skies had cleared. Even though the wind was still out of the north, it was a blue-bird type of afternoon hunt. I shot one gadwall. Joe and Dick did not shoot anything.

Howling at the Moon

When we returned to the camp that evening, it was dark. We weren’t real hungry so we ate ham sandwiches for dinner. The toddies were flowing and we were getting pretty fired up. There was football on the radio and the fire was ablaze. As we looked to the east we saw the full moon start to disappear in what was to be a near full-eclipse. The effects of the alcohol took hold and the next thing we knew, all three of us were howling at the moon in a way only we knew how to. Annie must have thought we were crazy. And I suppose if anyone had seen us, they’d have thought the same thing. We laughed and carried on for over an hour. Eventually I looked at my watch and saw that it was 9:30 and decided I’d better get to bed. Joe and Dick came in after I did. We slept well that night.

The next day we headed to the blinds early again. It was a warm morning with little or no clouds. Not much was flying. Joe and Dick shot a few ducks and I didn’t shoot anything. We headed back to camp, packed up and headed home. In the end, we ended up with 20 ducks – 3 pintail, 6 gadwalls, a mottled duck and 10 teal. But it was another excellent trip for Joe, Dick and me. It was a decent start to the season. Can’t wait to go again. Thanks guys!