The 2nd split of the 2002 duck season in Southeast Louisiana opened on Saturday, December 21st. Dick, Joe and I met at Gary’s at 1000 on Friday. Well, actually all three of us were early and we had the boats packed and we were on the road by 1010. It was a nice sunny day and we were all excited about going back to the marsh for a weekend of duck hunting and fishing. Joe brought his faithful golden retriever, Annie.

The trip to Venice was pretty uneventful other than I forgot to stop at the usual gas station to fill the boats so we gassed up in Venice. While stopping for bait and ice, I noticed a bulge in one of the tires on the trailer for the flatboat I was towing. We inspected it and decided to ride it until it blew. I’m happy to report it made it all the way to Venice and back without expiring.

We launched without incident and drove both the mudboat and flatboat to the campsite. A drilling rig had been moved in and was drilling a well in Red’s pass. Other than that, the marsh was basically the same as we left it the previous month. Along the way I spotted a coyote sitting on the side of the canal leading to the campsite. It’s the first time I’d ever seen a coyote in the marsh. It was quite big and looked healthy and I was appreciative that there was such wildlife still in the marsh.

We set up the campsite and decided to go fishing. The Gulf was a little rough so we stayed inside. The wind was blowing pretty good so we packed it in for the day and headed back to camp. We knew Saturday would be the day to fish because of the weather pattern and we knew the wind would lay down. Not good for duck hunting, but great for fishing.

The weather back in November for the opening of the duck season was not ideal for duck hunting and this weekend would prove the same. With sunny skies and temperatures reaching into the 70’s, we anticipated the ducks would not be flying in great numbers. And we were counting on Saturday to be a great fishing day.

Back at the campsite, Joe fixed some awesome hamburgers over the fire for dinner. We drank a few toddies, then went to bed. Unfortunately Joe forgot the pump to the big air mattress so we were all forced to sleep on the hard ground.

We got up around 0430 Saturday morning. Dick fixed coffee and we headed out to the blinds around 0530. Joe dropped me at the teal spot on the back canal. Dick and Joe would hunt with Annie in the main pond. We still had a north wind Saturday morning which was good, but there was no water in the pond Joe and Dick were hunting. I had no water in my pond either, but we had anticipated this the day before when we set out my decoys and we had placed all of them in the canal.

I had the first shot just before it got light when a single teal came in over the decoys. I had singles come in that morning, shooting four but missing on at least 2 others. I had no big ducks come over me, but I was happy to see the teal. Last month we didn’t see hardly any teal and it was cause for concern. But on Friday when going to put out my decoys we scared up a very large flock of a couple hundred teal, so we knew they were there.

Joe came to pick me up just before 0800. They had shot only two gray ducks but could not get to one of them because there was no water in the pond. It wasn’t a great hunt, but our thoughts were on the fish.

After the morning hunt Joe fixed bacon and eggs at the campsite then we headed out to fish. The wind had died down but it was still a little rough in the Gulf. We fished inside the marsh and Dick said the first one to catch a fish had to buy the drinks.

As we drifted down a canal, we could see swirls in the water which we were hoping were redfish. Sure enough, they were. I caught the first redfish and from there on out, we caught fish after fish. We ended up at our favorite intersection of two canals and the lake where we anchored the boat and loaded up on the redfish.

There was only one problem. The fish were too big. It’s a problem you like to have, but we wanted redfish to put in our freezers. We did manage to catch nine small ones to keep while releasing close to 20 big ones. And as you can see, it was a great day for fishing!

Suddenly around lunch time the fish stopped biting. We had fished right at low tide and when the tide had just started to rise. As the tide started getting a little stronger, the fish stopped cooperating. So we headed back to campsite where Joe cooked us another one of those great hamburgers. Damn those things were good!

After lunch, Dick wanted to fishing again. I didn’t feel much like fishing. I was anxious to get back to the blind. So at 2:30 that afternoon, Joe dropped me off in my blind with a six-pack of beer. It was a warm sunny day and there wasn’t much flying. But I enjoyed the peacefulness and the beauty of the marsh in my solitude. And I enjoyed my Budweiser too.

I saw a few ducks but they were mostly high flying big ducks and they would not come down despite my calls. I thought I’d get a single teal or two drop in but there was nothing for over 2 hours.

As the sun prepared to set, I was beginning to wonder if I’d shoot anything when all of sudden, out of nowhere, came that huge flock of teal of several hundred and they landed in the canal before I realized what the hell had happened! I shot two and missed a 3rd and was reloading when damned if they didn’t come back around and straight over the decoys again. By the time I had reloaded, they were out of range. What a rush! There’s nothing like the feeling that comes over you when a huge flock of teal invades your pond. It’s like nothing you’ve ever experience.

The tide was rushing in and the current in the canal was quite strong. The two teal I’d shot were quickly floating away so I jumped in the pirogue and retrieved them. I still had about 30 minutes to hunt, so I decided to pick up a couple of my decoys and put them in the pond since there was water there now. Then I quickly paddled back to the blind as I saw ducks flying here and there.

I hadn’t gotten back to the blind five minutes when two big ducks came straight at me over the pond. I was glad I’d moved some of the decoys. They came directly at me and when I beaded in on the first one I realized that Mr. Budweiser was affecting my vision. I took an extra second or two to steady the gun and shot the first duck almost too late. He fell behind the canes on the other side of the pond. It would take a big effort to find him so I decided not to chase him down and to wait for Joe and Annie to show up. I had taken so much time focusing on that one duck that I didn’t have a shot at the other.

The sun began to set. Joe and Annie came to pick me up. Joe brought the mud boat to the location where the big duck fell and there it was sitting on the side of the pond still alive. Annie retrieved it. It was a nice big gray duck. It would be the only big duck I’d shoot all weekend and it made my day.

Joe brought me back to the campsite in the mudboat. Dick had the fire going and the lanterns lit. Joe fixed gumbo for dinner but forgot to bring the rice. We ate the gumbo, drank a few toddies, watched the moon rise and went to bed.

We arose at 0430 Sunday. Dick fixed coffee and we were all a little sore from our 2nd night sleeping on the hard ground. We headed to the blinds. Dick and Joe picked up their decoys and moved to another spot since there was no water in their blind. I shot two teal and they didn’t shoot anything that morning.

We packed up early and headed on in. The weather was too nice for ducks. By the time we made it back to the lauch, it was 75 degrees in Venice.

Heading back to the launch I was able to catch two excellent shots of Dick driving the mud boat. 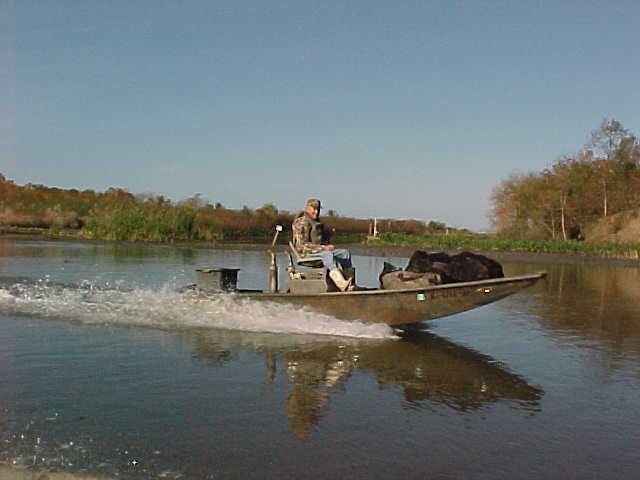 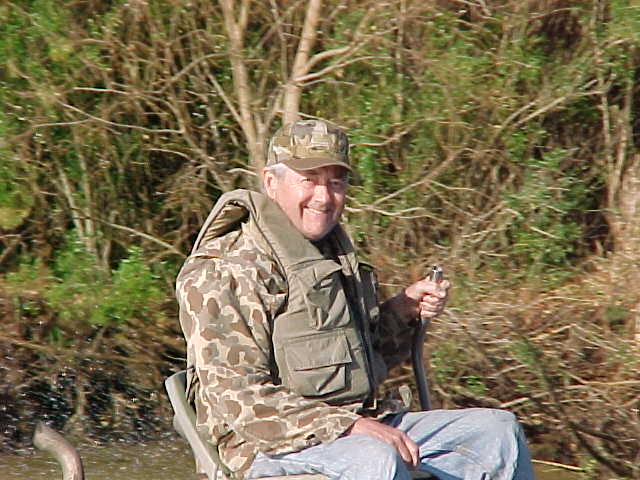 From the smile on Dick’s face, you can tell he enjoyed himself. And we all did. The weather was too nice to bag a lot of ducks but the fishing and comaraderie more than made up for it. It was another in a very long line of excellent trips to the marsh for the Pecot brothers and me. Our only wish was that their younger brother Buck could have been there. Thanks for another memory guys!